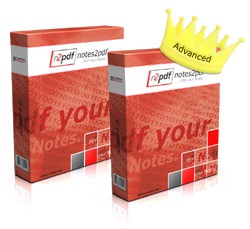 What are the advantages of the combined use of our software? When do n2pdf customers use webPDF and what for? What conversion options does the combination of both offer?

The n2pdf Advanced Bundle from SoftVision

Our conversion tools have been specially tailored to your area of application. This means that our tool is specialized in the use with Notes/Domino whereas webPDF is the professional PDF solution for companies, with which all formats can be converted and further processed. There are numerous possible applications here:

Concrete examples for the successful use of webPDF:

Use the combination of our software by signing and certifying your documents with webPDF. We also recommend n2pdf in combination with webPDF if you want to implement electronic invoicing from Notes and require revision-proof archiving. Countless file formats can be converted without having to use an original application. In addition, with the Advanced Edition you can use all functions of webPDF:

You can find more information here in the current blog article