DSAGLIVE 2021 – Courage for the digital transformation 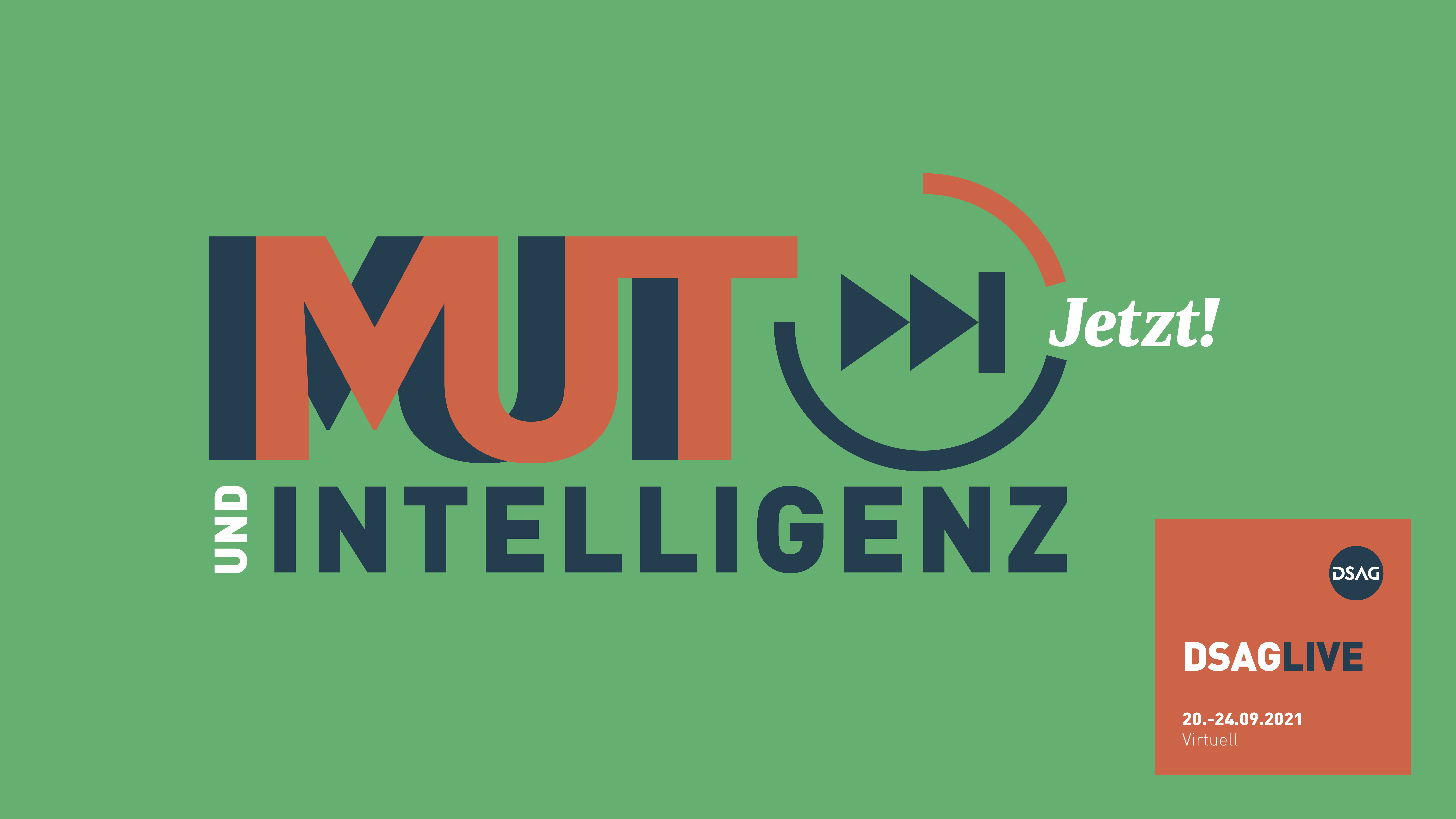 As expected, this year’s virtual event of the DSAG (German-speaking SAP user group) offered a good line-up of lectures, keynotes, talk rounds and sessions with many interesting impulses for the participants.

A diverse range of events and the opportunity to network once again attracted around 3,000 participants to the DSAG Annual Congress 2021. DSAG is one of the most important user associations in the world with more than 60,000 members from over 3,700 companies. With around 130 presentations, the online event 2021 once again offered a wide range of opportunities for exchange. In general, the DSAG annual conferences are a recommendable event for all SAP users as well as partner companies of SAP.

Due to the composition and the combination of DSAG and SAP board members, it was possible to form good discussion groups and to deal concretely with SAP experts. The focus was on the challenge of digitalisation and what this means for companies in concrete terms. The deficits were also discussed, which have come more into focus, especially due to the Covid pandemic. The results of the DSAG and ASUG surveys on the topic of cloud and RISE with SAP and  SAP S/4HANA were also discussed.

DSAG Chairman on the topic of Cloud and RISE with SAP

One point came up again and again: no company will be able to avoid working with cloud systems in the future. The two topics of sustainability and corporate networking as well as working with the cloud were highlighted as the most important areas. In concrete terms, this also means that companies will have to decide whether they want to work in a public cloud, in a private cloud or in a hybrid model in the future. In this context, DSAG Executive Board Chairman Jens Hungershausen highlighted the most important challenges in the use of cloud services for companies in the introductory keynote. Here, the focus is on questions regarding the licensing model and licensing costs, data protection/security and integration. You can find this and other presentations on the DSAG YouTube Channel (in german):

According to Hungershausen, companies in the DACH  (D-A-CH or DACH is a made-up word or acronym for Germany, Austria and Switzerland.) in particular are still rather reticent about the topic of the cloud. Concerns about the security of sensitive data are always in the foreground. It was also mentioned here that there is still room for improvement at SAP and, according to surveys, DSAG members have had little experience with the topic of the cloud.

RISE with SAP and Hana Cloud

Hungershausen also explained that it should be made as easy as possible for customers to migrate their SAP systems to the cloud and that RISE from SAP does not automatically mean business transformation, but that the companies themselves must provide the impetus and become active. In this context, it was once again emphasised that the partners, i.e. service and solution providers (examples of this: XFT or projekt0708), play a central role in the DSAG and SAP ecosystem.

Hungershausen advises interested parties to take a neutral look at RISE and to exchange information about it with other members via the DSAG committees. One thing is certain: The digital transformation is in full swing, whether you like it or not. (The Corona-Pandemic has once again highlighted the deficits and there is a danger of a gap between companies that were able to set the course in time and others that lack the means to do so). The digital dilemma of most companies is often that they have to concentrate on securing their existence in the here and now, but the challenges of digitalisation are related to the future, says Hungershausen.

Above all, cloud/networks and cross-company collaboration will become increasingly important, as was the consensus among all participants throughout the DSAG. This means that companies must open up more when using cloud services and SAP must support them. DSAG plays a (mediating) role in this with its approximately 3,600 companies and RISE can offer a good solution for some companies.

The motto of DSAGLIVE: Courage and Intelligence – Now!

The credo of the event gets to the heart of what is important right now – this motto served as an impetus for the event and ran as a common thread through the various presentations and discussion rounds. Together, the possibilities and limits of an intelligent and sustainable transformation with SAP were discussed against the background of the current situation of SAP user companies.

The main tenor: We need the courage to change! For DSAG Chairman Jens Hungershausen, this also includes the DSAG. Here, too, courage is needed to embrace and shape the digital transformation. Just like many other companies in Germany, the necessary investments are currently made too rarely, hence the motto. Hungershausen also explained that surveys by DSAG and ASUG showed that the economic impact of the pandemic was fortunately less severe than first suspected, but that the digital tasks and requirements are enormous. The Executive Committees of Austria and Switzerland expressed similar views. Here it was critically noted that SAP is also being put to the test here and still has to prove itself.

At the DSAGLIVE, in addition to the exchange of information among the members and a stocktaking of the DSAG itself, it was also a matter of pointing out potential for improvement with regard to SAP and also critically noting where to start in order to improve the products and the cooperation with the users.

Managing Director Dr. Mario Günther also commented on the mood within DSAG, highlighting some fields of action related to DSAG: DSAG is also breaking new ground and was able to convince with many virtual members’ meetings and a total of around 650 virtual events with 66,000 members and participants. In addition, the DSAG Academys are already on the right track. This is primarily about knowledge transfer, seminars, training in SAP and offers for students. Günther also emphasises the approach of thinking/planning far into the future. Keyword future-proofing 2027, what does the range of services and topics of DSAG look like in the future?

The challenges of the current era and how companies can transition highly customised systems and processes into S/4HANA cloud environments was a key discussion point at the conference this year. Christian Klein (Chief Executive Officer (CEO) and Member of the Executive Board of SAP SE) highlighted some concrete customer examples such as Tegut or ZF Friedrichshafen in his presentation “Intelligent, Connected, Sustainable: Shaping the Future Together”. Both companies have successfully implemented major projects together with SAP. Here in Fulda, the first “Teo” self-service shops (Tegut) have recently opened.

Klein sees SAP’s main advantage in the fact that SAP products provide an answer to major problems of this time. These include the problems of interrupted supply chains and, above all, the challenges of climate change. The big advantage of SAP here is the holistic approach and real-time control, which makes it possible to react quickly and flexibly to new requirements and offers many possibilities for adaptation.

At the same time, Klein notes that business requirements are unfortunately often clearly opposed to IT reality and cannot be easily reconciled. RISE can be a bridge between IT and business, and with the modular approach everything can be combined and expanded into an integrated ERP landscape. In general, SAP scores with the good integration in hybrid landscapes and with adaptability, according to Klein, who also praised the App Store.

With a view to the future, C. Klein noted that the two megatrends of business networks and sustainability cannot be avoided as a company. In addition, SAP wants to continue to expand the partner network and work with many partners and start-ups to improve and expand the SAP offering.

Other topics at this year’s event included customer-centric digitalisation and digital transformation, concrete customer examples and, for example, as a special session, the topic of change management in SAP transformation projects and what companies should consider during a transformation in order to lead the project to success. Within the framework of a panel discussion, the success factors for good change could be discussed.

Two other very exciting approaches were offered by Thomas Saueressig, Member of the Executive Board of SAP SE, SAP Product Engineering, and Thomas Henzler, DSAG Board Member, on product innovations and solutions, which above all promote the network idea and make it possible to consider and manage economic, ecological and social aspects holistically.

Th. Henzler’s keynote also addressed the question of how hybrid scenarios can look for customers with regard to the cloud and what this can mean from a commercial and support perspective. How can on-premise and cloud be combined and what could new licensing models and contract models look like?  And what does support look like then?